Discover Yourself: A NEW AGE MEANS A NEW ADVENTURE by Susabelle Kelme...

Discover Yourself: A NEW AGE MEANS A NEW ADVENTURE by Susabelle Kelme...: FEARLESS FRIDAY I’d like to thank Brenda for hosting me on her Fearless Friday blog this week.   My debut novel with The Wild R...
Posted by Karen Blake-Hall at 09:49 1 comment:

John Byk, who writes under the pen name of Conrad Johnson, wrote a mystery called Crying Bullets which I thought of today in regard to the school shootings in Ohio. I finished Crying Bullets recently, liked the book so much, and today just can’t get it out of my mind.

Crying Bullets features Arnold Penxa, war veteran and retired policeman, who uncovers a planned school massacre with a motive so insidious it would make the devil blush with envy. The problem is that nobody believes him except for a few close friends, so he's forced to act alone to bust up the plot. This is Detroit, Michigan, a city that makes its own rules where the line between common sense and crime is never clear.

John was kind enough to send me his reflections on a few questions I asked him to consider.

1. With this recent news, how are you reminded of events in your life as a teacher who lost his job because he blew the whistle on the school's terrible security procedures?

If you are referring to the high school shootings in Ohio, I am deeply saddened and also angered at the administration for not having prevented this. School officials often see this is as a societal or psychological issue that is better left unspoken or left to localenforcement who do nothing but clean up after the fact. However, I am happy to say, that after losing my job (actually I was forced into retirement), the upgraded security procedures which I spoke out for were finally installed because I created such a rancor in the localcommunity. If one child's life will be saved, then it was all worth it.
Also, I have a good rapport with the new principal there who was an ex Chicago cop who I am in regular contact with and who, I found out, was supporting me behind the scenes during the entire ordeal.

2. Do you find signs of optimism about a recovery for Detroit’s economy?

No. Politicians have been promising the mythical resurrection of Detroit since the population exodus began in the late 60's and nothing has changed. Of course, there will be certain economic 'pockets' that will thrive and be protected, like the casinos, the GM headquarters downtown and the bridge to Canada for NAFTA purpose, but the rest of the city will rot slowly out of sight.

3. Penxa realizes graft and poverty are endemic at the end of Crying Bullets and retreats. What will it take for the public schoolsystem to overcome incompetence, declining enrollment base, and all the other problems it’s currently beset with?

I don't think Penxa actually retreats. He's just licking his wounds. There's no victory without sacrifice. I expect him to resurface in a later work. As for the Detroit Public School system, I believe only an extreme gutting of the top heavy, corrupt and central administration needs to be done and parents and teachers need to step up and take charge of their schools like they do in forming vigilante groups to
protect their neighborhoods from crime.

4. You mentioned writing Crying Bullets drained you. How closely have you identified with Penxa?

Much too closely but it was something that I finally needed to come to terms with in my life. Like I mentioned above, there's no victory,small or great, without pain or sacrifice. If a person decides to put himself on the line for a just cause, then he'd better be prepared to deal with the consequences if he or she plans to continue all the way.

5. How close are you to finishing another book and what is this one about?

I couldn't write anything for weeks after finishing Crying Bullets, so
I decided to write a small nonfiction, self-help book which I write
under a pen name. After toying around with several other ideas related
to Detroit, I finally decided to give it a break and try something
completely opposite, humorous and fantastical. Currently, I'm working
on a sci-fi novel called, Pissed Off Aliens, a la Kurt Vonnegut
Jr., which is really a disguised metaphor about globalism and the
destruction of earth's natural resources by aliens from the planet Rio
Tonto. It takes place in the fictional county of Paulding near the Big
Lake (which is really Lake Superior) and is told by an escaped slave
worker who records what he calls the "true story" of how the aliens
conquered the earth as his grandfather told him before he died. It's
one hundred years into the future and he's forced to record the
narrative from deep inside an abandoned mine shaft so that the Tontins
won't locate him and "de-grid" him. It's very colloquial and
tongue-in-cheek and fun to write and it's what I need to do at the
moment.

Jill Edmondson really knows how to throw a party. Her book launch Thursday night at the Pilot tavern featured yummie food, a toast with some great liqueur and the highlight, she read from the 3rd Sasha Jackson mystery: "The Lies Have It" a tale of fetishists and murder. Well done Jill!
Posted by Linda Cahill at 09:48 No comments:

Stuart MacBride is another in the current crop of witty, gritty Scottish writers that have taken the mystery world by storm. Last week, HarperCollins Canada put on a super event with Mr. MacBride who is on a tour. Guests were seated seminar style in a large room with huge windows and Mr. MacBride was in the front like a lecturer. Cake was served and an amusing cardboard cutout mask of a Stewart McBride-like beard sat at each place.

The publishers generously provided a proof copy of Mr. MacBride’s next book Birthdays for the Dead and bags of Halloween candy. The author himself is delightful. High forehead, glasses, dark ponytail, he was six feet of cheerful charm, fast talking and funny.

Thrilled to get an advance copy of a talented author’s new work, I dove into Birthdays for the Dead as soon as I got home. It’s about a somewhat washed-up police investigator on the track of a serial killer with a taste for 12 year old girls. MacBride has a gift for the telling detail, the feel of a cold foggy night, the smells of a dirty slum, the sound of a lowlife bar. The amusing side he showed in his chats and his personalized book signing, surfaces frequently in the book, especially in the detective Ash Henderson's relationship with the loopy young police psychologist Dr. Alice McDonald. It provides welcome comic relief, an antidote to the noirish, gruesome detail of his blackly comic vision of contemporary Aberdeen and environs.

Much has been sung about the man, who would have been 100 years old this year. His theories have been lauded, bandied about, criticized and dissected.

But in the end, Marshall McLuhan was right: “The medium is the message.” There’s no denying it, for even as I write this, I’m taking part in his theories. And yes, we are a “global village,” and one that is getting smaller by the year, thanks to media technology.

McLuhan predicted an entity like the Web, that all-encompassing, overpowering means of communication and information that forms our everyday life – from work to education and business. The proof is before us, on our phones and our computer screens. It is amorphous and unseen; it is cyberspace, the information superhighway, virtual reality.

McLuhan’s ideas really hit home this week as I started a new media job. I’ve known for years McLuhan was right, but the past few years have seen staggering advances in how we communicate and produce information. I can sit in a Hamilton, Ont. newsroom, in front of a computer, and edit and write headlines for a newspaper that is two thousand miles away. It’s just how things are done now.

The production of hundreds of newspapers across North America has been outsourced to centres such as this, where designers and editors put the flesh on the bones on a newspaper. No longer do you have to sit in a city's newsroom to do the job. It’s all part of the Information Revolution, which is taking us, whether we want it or not, to even higher levels of communication.

Is it bad? As someone who started out in the newspaper business when hot type was still around, I’d say no. I’m no sentimentalist. I think progress is good. Change is good. The transformation of the media world the last twenty years has been fabulous, innovative and creative.

Most importantly? The message – and the global village - is alive and kicking.

Posted by Heather Mac Archer at 20:25 No comments:

Just finished my final event at the Vancouver International Writers Festival. A brunch with a bunch of great writers, Canadian and Australian. The four days were great but it was so action packed that I haven't had time to post anything. I really don't have time now but will do more when I get back home.
Posted by Wayne Arthurson at 13:43 No comments: 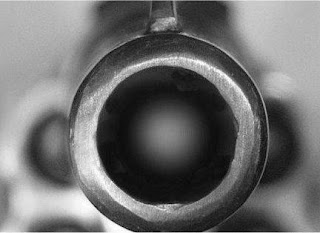 Over on the Crime Writers of Canada National Crime Writing Blog we're writing on the theme of how killing people on paper isn't as easy as it seems. Blame it on CSI, but the average reader is much more savvy about things like blood spatter and gunshot residue. That means if you use these technical terms, you better use them properly.

I ran into a problem when I was using - that is, misusing - prescription drugs. Sure, most people won't know that it's hard to kill someone quickly with drug overdoses. Then a nurse will read your ms and tell you it doesn't work that way. Fortunately the nurse is a friend and she happened to have her outdated copies of her drug bibles.

Some authors get around the technicalities by letting the cops work it out while their amateur sleuth puzzles out the motives. Others, myself included, do a lot of research. If we're lucky and tenacious, we make friends in the right places. I pick the brains of my friends, my friends' friends and people on the street if I over hear an irresistible tidbit of information. My children pretend they don’t know me, then laugh at me later.

Currently I have an almost pathological need to ask police officers questions. You can always tell when a cop walks into a coffee shop where I'm writing. My eyes light up. I take in visual details and look for an opening to glean a bit more knowledge.